This website uses cookies to improve your digital experience & I'll assume that you are ok with all of this, but in the case you are not you can always opt-out whenever you wish.
ACCEPT Read More
BACK TO PROJECTS

London food vendors aggregator aimed at people/teams that want to jump the queues and grab their lunch as fast as possible.

Redi.Grab.Go is a takeaway ordering service start-up that launched in 2016 wanting to bring a new experience to the food ordering scene in the middle of London by helping its users schedule orders for pick-up and helping them get some exercise and unwind at the same time.

The first version of the mobile app was a good MVP but did not perform as well as expected by the founders in comparison with their active competitor apps such as UberEats, Ritual, Deliveroo and it was not offering a great experience and a fluid ordering process to their users.

From a brand standpoint, the whole application was lacking individuality and personality, it was stuck somewhere between a prototype and an MVP and this was causing it to fade and not inspire trust to its users.

In addition, besides tackling the above mentioned there was also the request for an Android version of the app to be designed and develop which meant a more unified visual language that could fit both platforms.

The first version was dropped and decided to start from scratch based on available information given by the client and information gathered and measured by tests, usability audits, user interviews, drop-off numbers, and the feedback received on both App Store.

After compiling all available data and pulling out all the pain points, new userflows were made and the information architecture was restructured for a shorter ordering process and a modular visual system was put in place to make room for future planned features, putting an accent on a reward-based system to increase retention and also gamification.

The home screen and all its states suffered most of the iteration process in order to set the tone, style, and direction of most of the design of the app, thus building up almost all the components needed with their additional states.

After collecting all the available assets from the client, finishing touches were added to the branding, adding a more elaborated color palette to this, in order to fit the product requirements. 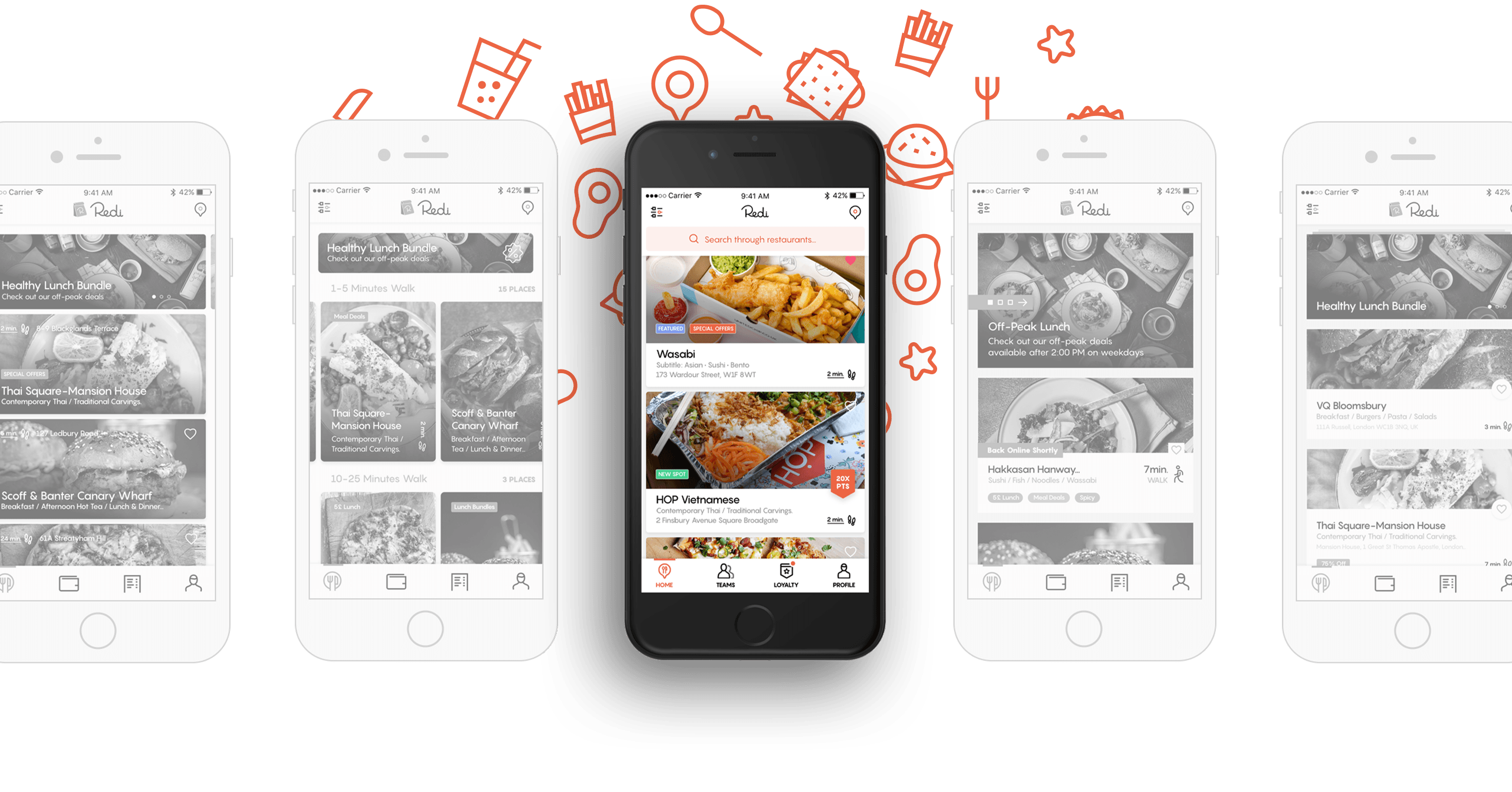 Once most of the layout was nailed down with the home screen, the other primary sections were inventoried, wireframed and iterated on to fit requirements.

Designs for screens like CHECKOUT and LOYALTIES were tested and tweaked for optimal userflows.

Special attention was given to the ORDER STATUS screen where simplicity was required but also the right amount of information presented in incremental 3 STEPS process - Order Places / In Preparation / Ready to Pickup. 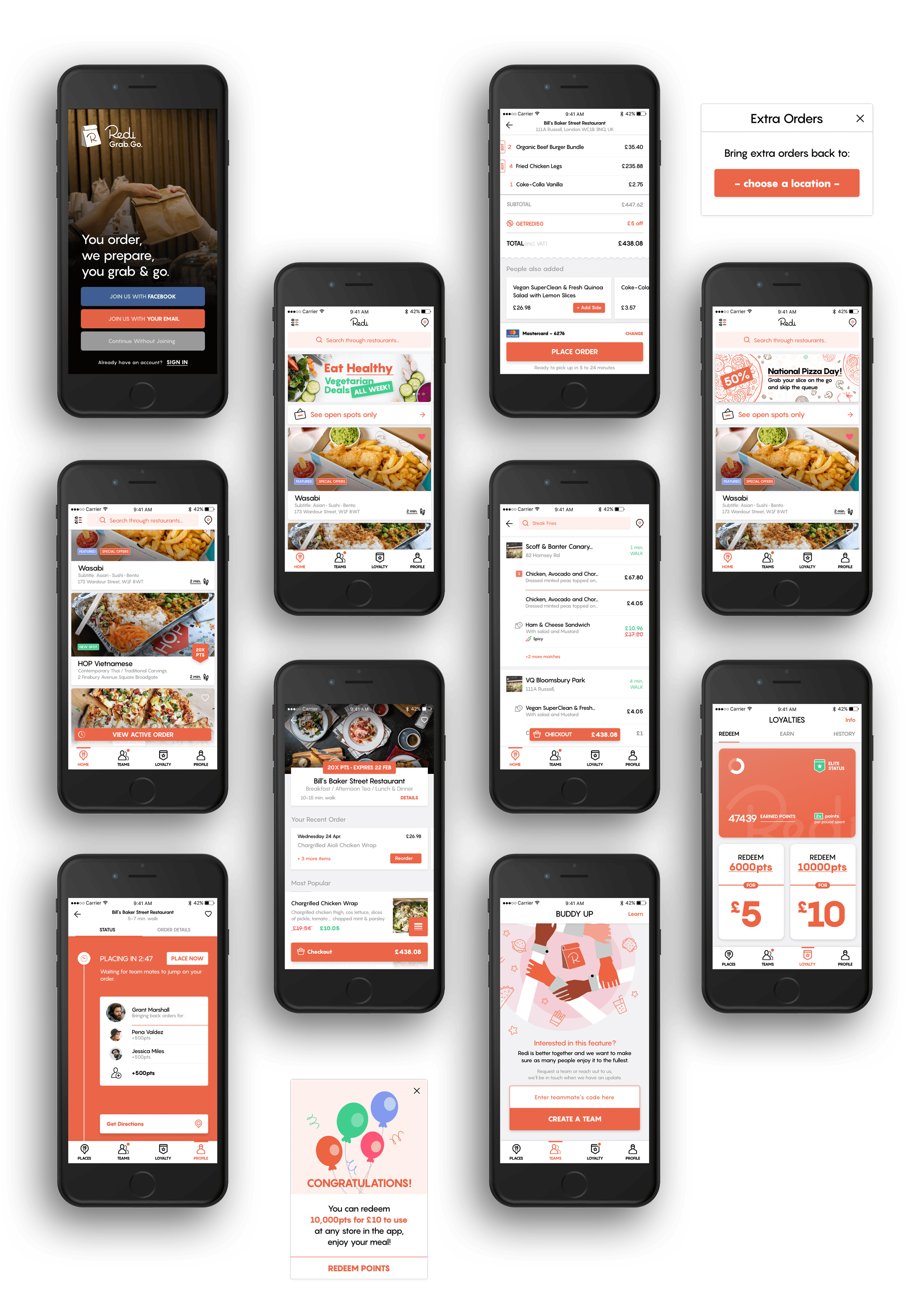 To complement the User Interface and help guide users through states and navigation, custom icons were made from scratch and iterated upon to meet expectations.

An outline style was picked to not clutter the user interface and let the product images push through.

Custom Illustrations were made to be used either in introductory screens, like the Onboarding Flow and the Tutorial for their Loyalty Section. 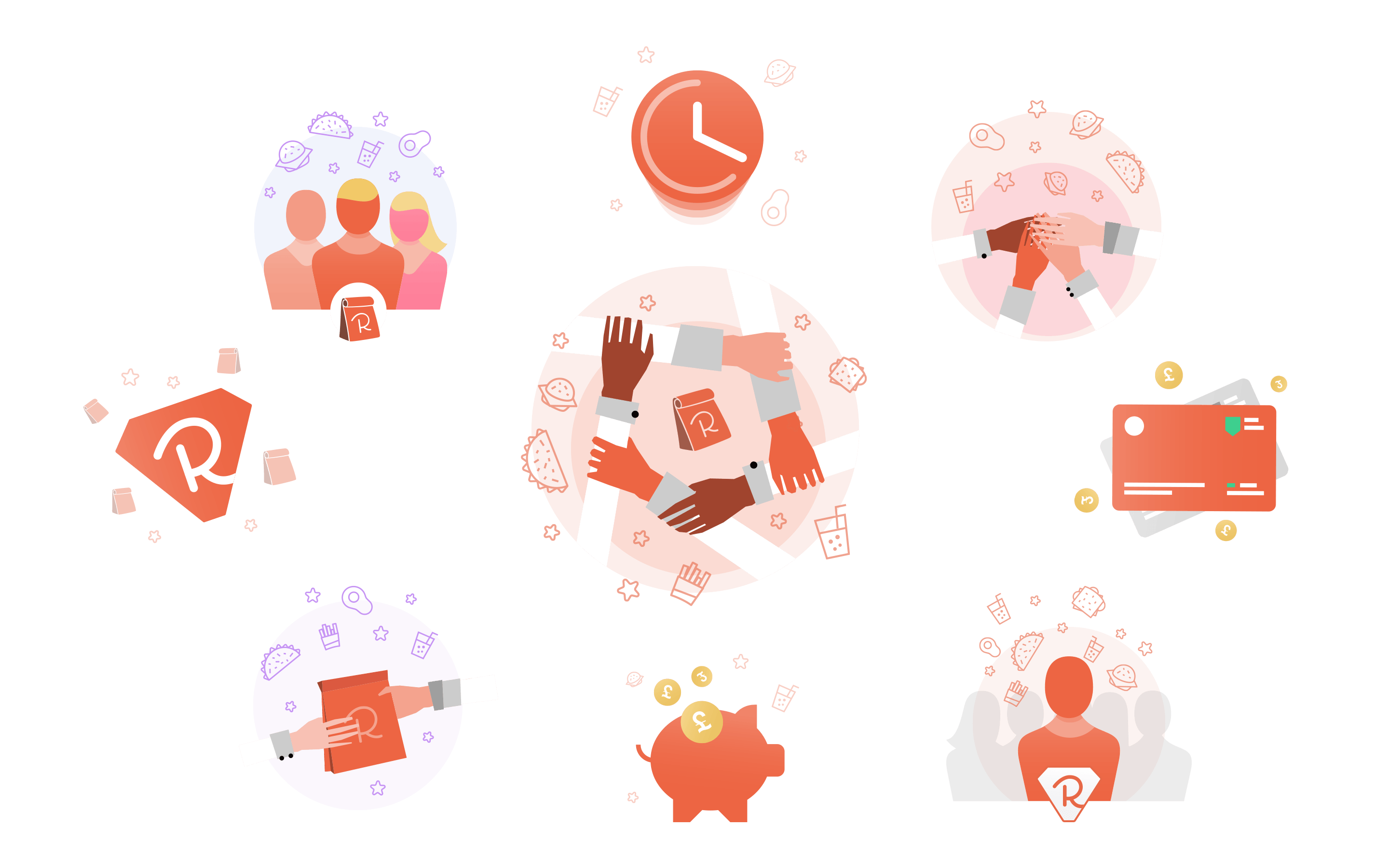 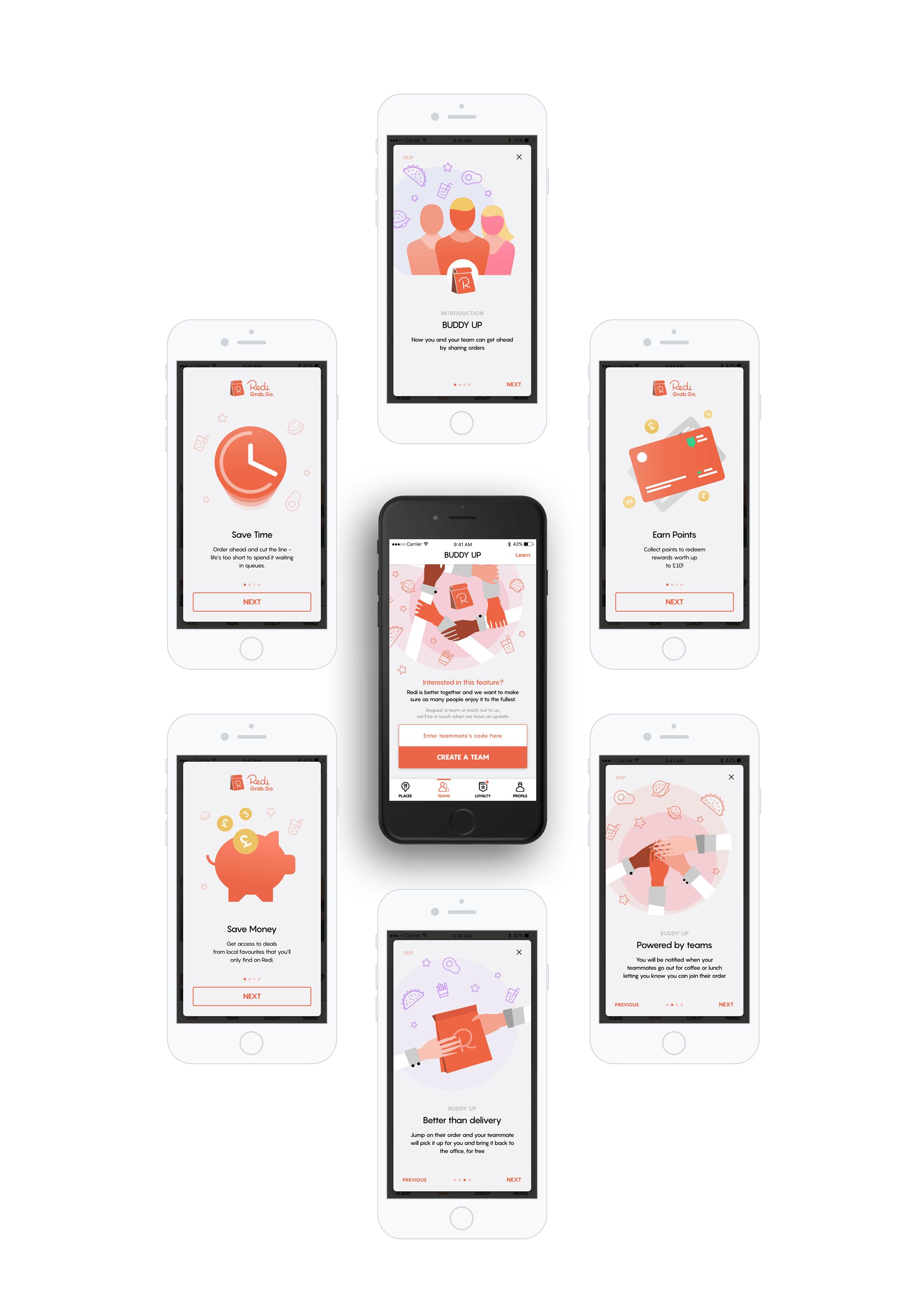 Before being bought by Camden Market the team wanted to iterate on their landing page to promote the application in many areas and companies. To that thought this was a final version from the iteration process. 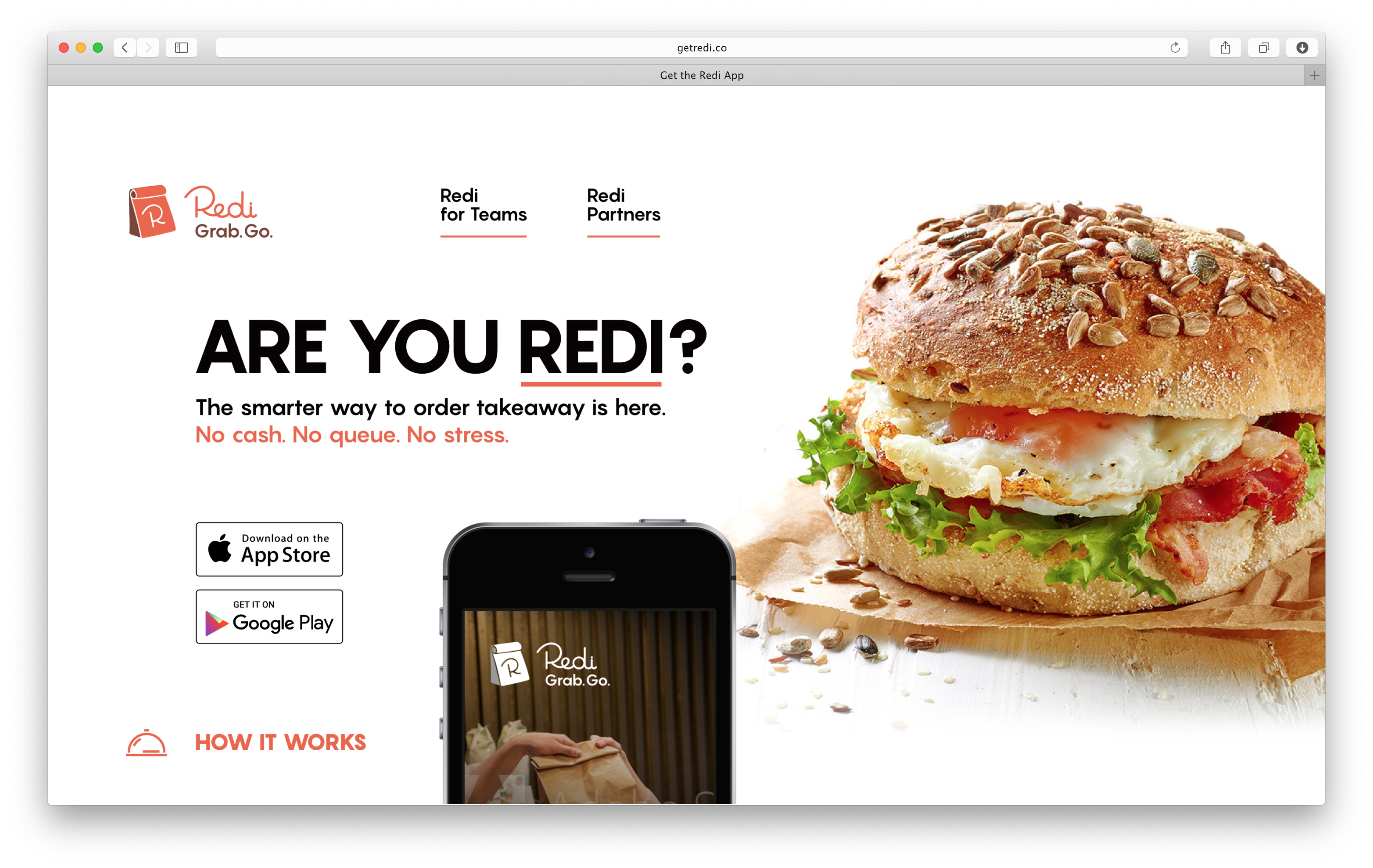 By the end of August 2018, Redi Application has been bought by Londons CAMDEN MARKET and has been renamed as such.

I've helped with the rebranding and the transition towards the new owners, but have not continued with them.

The application can be found on the appstore as "Camden Market".

Alex is an extremely talented and diligent graphic designer. He was quick to assist with any type of assets we needed, whether it were flyer designs for marketing, educational one-pagers for b2b clients or i.Os app designs. He also gave incredibly helpful recommendations and feedback, enabling us to turnaround projects super quick and with very few iterations. His work was always outstanding and on point. I would work with Alex anytime again on any project!